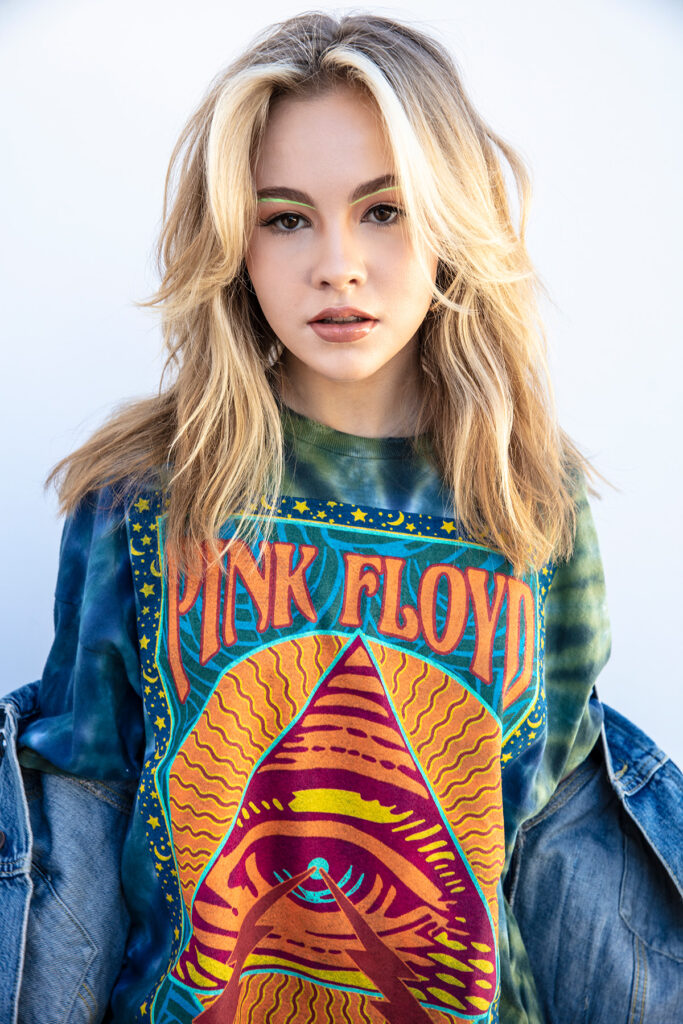 “Simply put, ‘Sinking Feeling’ is one of the most beautiful songs we’ve heard this year. Anna Duboc has such a unique way with words and that really shines through on this anthem of self-reflection.” -TREMG

World wise beyond her 16 years and more powerfully in touch with her deeper, darker emotions than most teens, fast emerging indie pop singer-songwriter Anna Duboc is gaining attention on social media platforms and YouTube. Her three singles released this fall, “Running,” “Sinking Feeling,” and “Ignorance is Bliss,” have already been shared over 5 Million times as sounds on TikTok. Having sung with several notable artists from Katy Perry to Andrea Bocelli, and with over 40 Million streams across all platforms, the multi-talented singer/songwriter is quickly emerging as a powerful and inspirational voice of her generation.

Prior to Anna’s success this year, she offered a mix of official videos and live performance clips of the six tracks from her debut EP, Beautiful Nightmare. The first single, “Flowers and Graves,” earned 2.9M YouTube views (official video). All the songs on Beautiful Nightmare were written by Anna and co-produced by Anna and her mother, veteran R&B/contemporary jazz singer/songwriter Carol Duboc, with Anna providing lead vocals, vocal arrangements, keyboards and programming.

One of Anna’s trademarks as an artist is a willingness in her lyrics to be super-vulnerable about personal issues like early life trauma and dealing with depression, and to tap into deeper, darker emotions than most girls in their mid-teens would dare to do. “I am usually very open about my emotions, though I don’t go into great detail about my personal life on my social media platforms,” she says. “I’m not generally inclined to really go in depth with people about my challenges one on one, which feels awkward to me. Music helps me write it out and express these emotions much more effectively.

“If I can write, sing and produce songs that can connect with what other people are feeling and help them through their difficult times of anger, sadness or confusion, that’s more important for me than worrying about my personal vulnerability,” Anna adds. “Over the past few years, I’ve definitely grown as a songwriter and gotten much better at putting my innermost thoughts, self-reflections and observations into words.” Currently, Anna is working with outside producers on several dynamic new singles that she plans to release throughout the summer and fall of 2022. She’s excited about these new collaborations, which she says are opening her eyes to other ways of producing and writing.

Anna launched her recording career in 2019 with her debut singles “Feel the Glow” and “Stay,” the track recorded with Lotus. The following year, she dropped a total of six singles, the self-penned “Yellow Car,” “Lonely,” “Blamed It On Me” and “Ballad” as well as compelling and infectious re-imaginings of Eilish’s “I Love You” and Demi Lovato’s “Stone Cold.” Though never released formally as a single, one of her most popular videos (currently at 1.9M views) is a cover of “Break My Heart Again,” written and originally recorded by Eilish’s brother and producer FINNEAS.

Having grown up in a highly creative family, Anna is a natural on stage, singing, dancing and performing since she was four years old. Her mother Carol has penned hits for Patti Labelle, Tom Jones, and others and has hit the charts with numerous jazz albums over the past 20 years. Several generations back, one of Anna’s great grandmothers was a prima ballerina and other was a concert pianist, while her great grandfather was an opera singer. From ages 4 to 7, Anna sang “Yesterday” so often that her tennis coach nicknamed her after the Beatles classic. Influenced by everyone from Queen to Ariana Grande and Rihanna and more recently Eilish, Conan Gray and Lizzie McAlpine, Anna began writing songs in the third grade and created a CD of her music for a school assignment.

Long before she was an indie pop singer-songwriter, Anna was lighting up the musical theatre stage at the Adderley School, where Grazer, Lotus and Golden Globe winner Ben Platt also attended. She performed the lead role in “Anything Goes,” her first musical, at age 5 with Grazer and as Penny in “Hairspray” with Lotus. Other shows she has starred in include “West Side Story,” “Les Miserables,” “Thoroughly Modern Millie,” and “Ruthless.” She was later a member of the MnR Dance Team, a competitive group that competes throughout Southern California and performs for local children’s charities. After winning the combination dance and singing solo competition, Anna was asked to sing the solo at Staples Center in front of Shaquille O’Neal and the L.A. Clippers. In August 2019, she performed numerous solos in the “Footloose” revival concert with Kenny Loggins and his band to an awestruck crowd.

“Whether people are familiar with my previous singles or are hearing my music for the first time,” Anna says, “I think they’re going to learn that I’m not just a 15 [now 16] year old who has some interesting ideas and puts them on paper, but I think through ways I can put emotions into my own words and metaphors. The overall message is that it’s ok to go through hard times. We all wear a façade to a certain extent, but my music is a way to tear that off and show the more artistic and emotional side of me. As much as I love performing, my favorite thing has always been the writing. It’s a beautiful process confronting some of life’s great difficulties and turning them into something beautiful with the perfect words and melody. Like we’ve gone through hardship, but something wonderful has come out of it.”